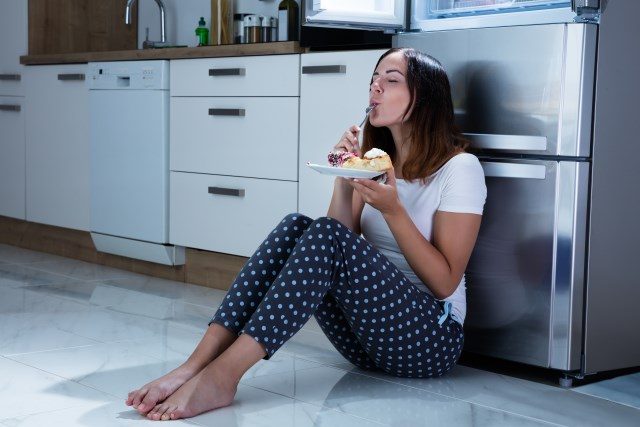 What Is A Parasomnia?

Parasomnias are a category of sleep disorders that involve abnormal movements, behaviors, emotions, perceptions, and dreams that occur while falling asleep, sleeping, between sleep stages, or during arousal from sleep. Most parasomnias are dissociated sleep states which are partial arousals during the transitions between wakefulness and NREM sleep, or wakefulness and REM sleep. – Wikipedia

Nocturnal eating syndrome is a sleep disorder that is characterized by compulsive raids on the refrigerator at night. Usually people with this sleep disorder are very light sleepers. When they awaken during the night, they have an overly compulsive feeling that they will not be able to fall back to sleep unless they eat something. Once out of bed and at the refrigerator, the compulsion to eat makes them gobble down food.

People with nocturnal eating syndrome are fully awake and remember eating the food the next day. This syndrome is a combination of a sleep disorder and an eating disorder. Insomnia is also a factor in nocturnal eating syndrome. Treatment for this disorder is usually received from a mental health professional that specializes in people with eating disorders. Improving sleep hygiene can also help with this disorder.

Sleep-related eating disorder also affects more women then men and is a variation of sleepwalking. During an episode of this sleep disorder, a person will eat during partial arousal from a deep sleep. Often they will eat very unhealthy or strange foods that they normally would not eat when awake. During an episode of sleep-related eating disorder, a person might eat frozen pizza, raw cookie dough, peanut butter on fish and even dog food. 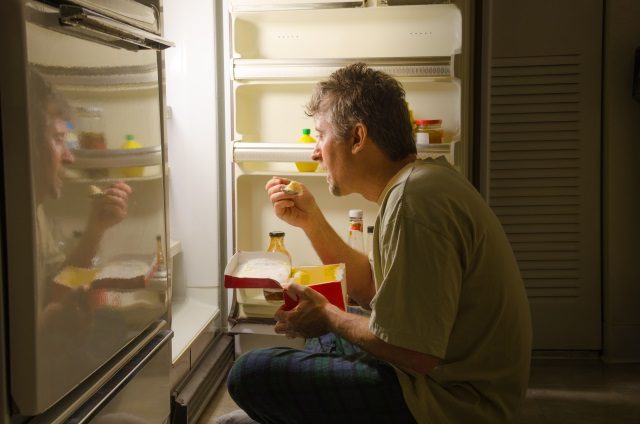 Often they are very careless and sloppy and may get burns or cuts while preparing the food. It is very difficult to wake a person during an episode and they have no memory of it in the morning. There does not seem to be a correlation to hunger during a sleep-related eating disorder episode, even if the person has eaten just before bed, an episode can still occur.

Although the cause of food-related sleep disorder is not known, several triggers have been identified. Medications such as lithium, a mood stabilizer, and the benzodiazepine receptor zolpidem are two of those triggers. People with mood and personality disorders or psychological problems such as bulimia are at higher risk of developing one of these food related sleep disorders. People suffering from other sleep disorders including insomnia, sleep apnea, periodic limb movement disorder or narcolepsy are also at higher risk.

People with sleep-related eating disorder usually have a history of sleepwalking. Because of this, people suffering from this parasomnina are considered having more of a sleep disorder than an eating disorder. Treatment with prescription medication is often very effective. Antidepressants, dopimine agents, anticonvulsants and opiates are often prescribed. Once sleepwalking is stopped so are the trips to the refrigerator.

Sleep eaters often are overweight because of the high caloric intake at night. The weight gain can lead to other sleep disorders such as obstructive sleep apnea. Seeking treatment, either from a medical or mental health professional is essential for good health in the treatment of sleep eating disorders.